A collection of rare books and secondary sources on the history of chemistry. 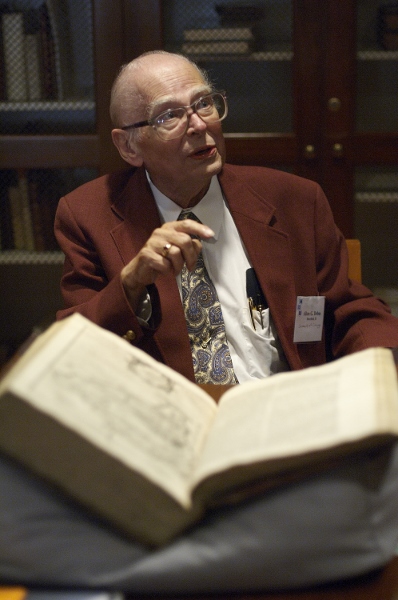 Allen G. Debus at the Alchemy Conference in 2006.

The late distinguished historian of chemistry and University of Chicago professor Allen G. Debus’s book collection was donated by his widow to the Othmer Library of Chemical History in 2016.  The collection includes over 300 rare books.  As is to be expected, the largest number—120—date from the 17th century, which was Prof. Debus’s specialty, with an additional 23 from the 16th century.  As is also to be expected from a scholar who focused on Paracelsus and medical chemistry, the collection is strong in these areas, with six titles by Paracelsus and two or more each by authors such as Jean Béguin, Nicaise Le Fèvre, Antoine Deidier, Daniel Sennert, and Petrus Severinus.  There are an exceptional number of works of Joseph Du Chesne, a.k.a. Quercetanus, on whom Prof. Debus wrote the entry in the Dictionary of Scientific Biography and who featured strongly in his book, The French Paracelsans. The collection is also strong in the works of the physician and natural philosopher Robert Fludd.  Surprisingly, about two thirds of the collection do not duplicate works already held in the Othmer Library.  Often, the overlap seems miraculous.  For instance, the Debus donation includes a first edition Musaeum Hermeticum (1625), whereas the Othmer Library only held the second, 1678 edition (notwithstanding Roy G. Neville’s excuse that the later was the “best edition”). Alternately, the Othmer Library held the first edition of Whitelocke Bulstrode’s An Essay of Transmigration, in Defence of Pythagoras: or, a Discourse of Natural Philosophy (1692), and the Debus donation includes a second edition (1717).  In two cases, we have otherwise identical titles that differ only in the publisher’s imprints.  Of great value especially are works in the Debus donation by important authors in the Othmer Library collections that we did not already hold, for instance two works by Isaac Newton, his The Chronology of Antient Kingdoms Amended (1728) and Observations upon the prophecies of Daniel, and the Apocalypse of St. John (1733), and American alchemist George Starkey’s Des hochgelahrten Philalethae drey schöne und auserlesene Tractätlein von Verwandelung der Metallen (1675). A dedicated book collector expert in the subject creates a collection that is far more than the sum of the individual volumes it contains.  The Othmer Library is very fortunate to have received such a wonderful resource.

The rare book collection of Allen G. Debus is fully processed and cataloged. The collection consists of 310 titles.

The modern books (post-1850) and secondary source materials are fully processed and cataloged.

Debus' gift included 508 bibliographic titles, totaling 669 separate volumes. Of this total, 337 titles were not previously held by the Othmer Library.