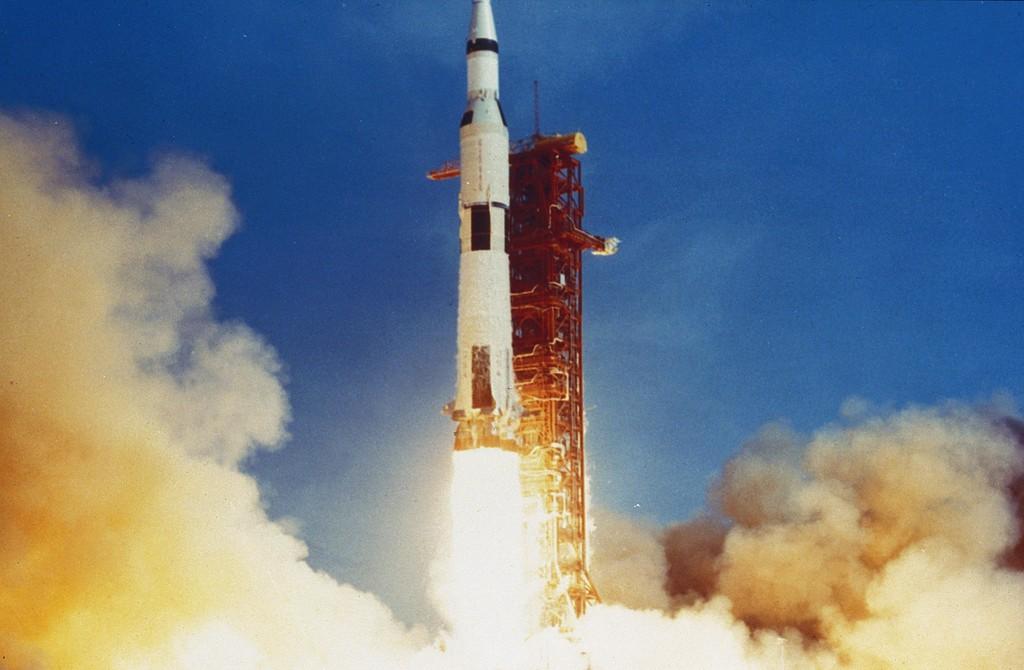 The result of President Kennedy's speech caused renewed interest for new frontier. What seemed like the end of chapter, society is faced with a new challenge and a new mystery to uncover. One of the goals developed by NASA was to conduct unmanned and manned space flights. The most significant of which happened on March 11, 1960, the launched of Pioneer V, exchanged valuable information about cosmic rays, the earth's magnetic field, and solar storms, and evidence of the existence of a large "ring current" circulating around the earth. While manned exploration comes with the risks of an ambitious project, none can project the danger that space holds. The benefit to manned exploration will impact the scientific community, extracting samples to bring back to Earth.

The first launch of the first ballistic rocket occurred on July 24, 1950, at Cape Kennedy, Florida. A slim shaped give the potential of incredible speed and is far superior to previous bird-like design that are incapable of orbit. Drastically, military personnel sought this equipment of mass destruction and scientist compromised for more "peaceful space exploration".

Project Mercury advanced and ended in year 1963. The main crew of Alan Shepard and Virgil Grissom accomplished their first task of orbiting the Earth three times, and Mercury was a spanned of four and a half months concluding five orbits. The operation was a success and showed many promises in future exploration: Project Gemini and Apollo coming respectively.

Project Apollo had great ambitions and could set the record for space travel; they accomplished in the three separate phases:

How to Look at Primary Sources?

The Science History Museum hosted their own collection of historical work. The Beckman Historical Collection compiled of many digital items that is available in the library's catalog. In the Digitial Collection, students can find images and oral history by navigating the search bar and filtering the desire material in the left column. To cite the work, students much look at the bottom right corner of the page to effectively give credit to the historians responsible for providing the information and the person whose information we are restating.

Go to: digital.sciencehistory.org/ to check out the institute's digital collection.

The library catalog is an expansive finding tool to discover the type of academic text you need for your research. Also found in the library catalog is archives, rare books, and journals. Students can narrow their search options by clicking the drop box to view specific collections. Beyond the simple design, students can explore further by clicking "modify search" to link keywords together.

Go to: The Othmer Library of Chemical History (sciencehistory.org) to check out the catalog.

President John F. Kennedy declared space exploration a new frontier during the height of Soviet Union and United States quarrel. The race to see either nation conquered space will be a remarkable accomplishment, in extension forecloses the discussion about global superpower and resolve the fighting entirely. Launching astronauts into space preceded Apollo 11, Project Mercury and Project Gemini was the first and second space exploration prior to the real test. People glamorized Apollo 11 and its crew: Niel Armstrong, Michael Collins, and Buzz Adrian accredited to the first moon landing (Space Exploration U.S.A, 1969, pp. 15-17). It had stunned the Americans now having access to television, broadcasting the moon landing across every home and radio channel. The moon landing was everything President Kennedy’s presidential term prioritized, although his passing was a few years before Mission Apollo accomplished their goal. In his state of the Union address, Kennedy said:

"Now is the time to act, take longer strides- time for the great new American enterprise- time for this nation to take a clearly leading role in space achievement ... I believe that the nation should commit itself to achieving the goal, before the decade is out, of landing a man on the moon and returning him safely to earth".

Who is Beckman and What is Beckman's Space Equipment?

Arnold Orville Beckman played a key role in the development of medical instruments in Project Gemini and Apollo. His contribution and expertise in biochemistry set the standard of protective equipment for extreme space exploration. Beckman involvement with the National Aeronautics and Space Administration (NASA) can be traced back to NASA first project, Project Mercury, introduced oxygen and cardon dioxide sensor in the astronauts' suit. Beckman latest contribution to Project Apollo is the "safety instrumentation package" that is tucked in the space suit, that enable astronauts to work in the Manned Spacecraft Center. The technology provided all the necessary information to keep everything functioning and paid deep attention to suit's malfunction. Beckman's Instruments go through prolong period of testing before NASA acquired these technologies, this allows expeditioners to work without a hassle. 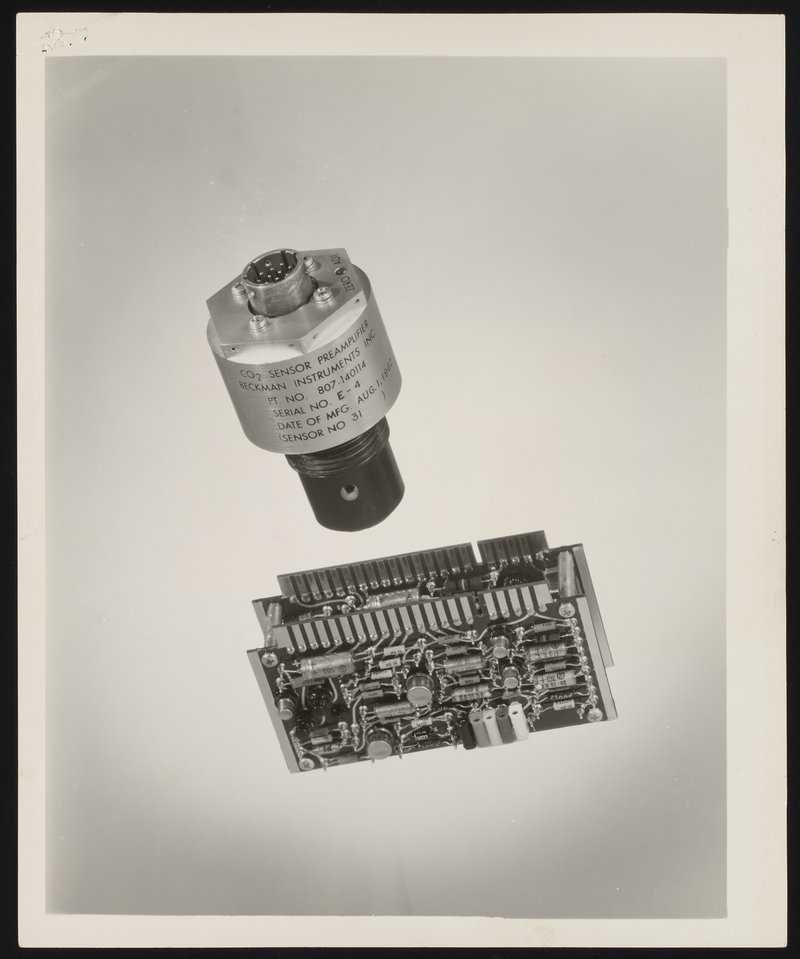 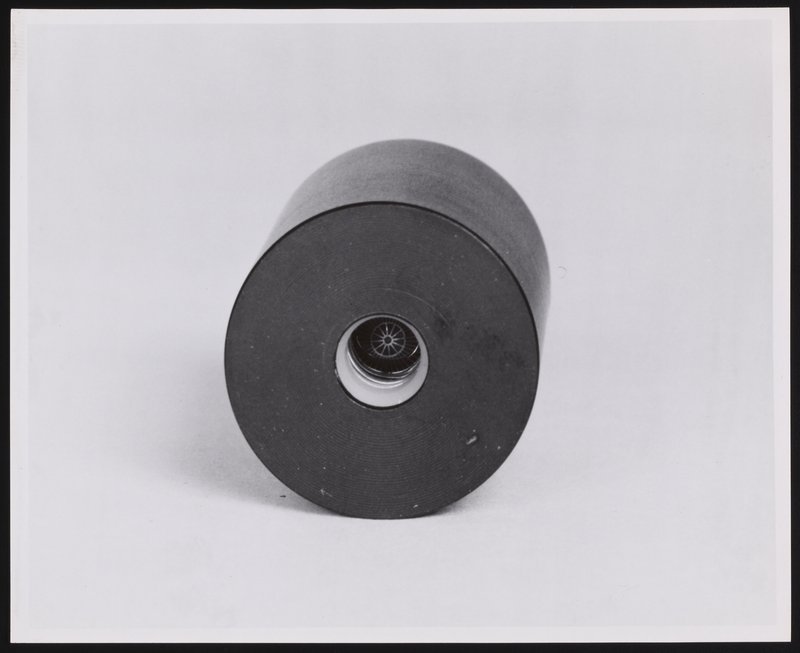 The "Carbon Dioxide Sensor" is found inside and within the boundaries of the space suit and helmet, to play an important role monitoring carbon-dioxide content in outer space and undeniable precision. This design was created by Beckman to keep a light-weighted and miniature carbon dioxide detector at hands. Before the instrument is suitable for outer space, the machine needs to be calibrated few many times to prove its accuracy and pose no potential danger. The right image shows a "Personal Life Support", and this also a cardon dioxide monitor but have another role because of the varying cardon dioxide particle pressure in the atmosphere. Similarly, both design is durable for manned space travel because of its light design and non-flammable material. 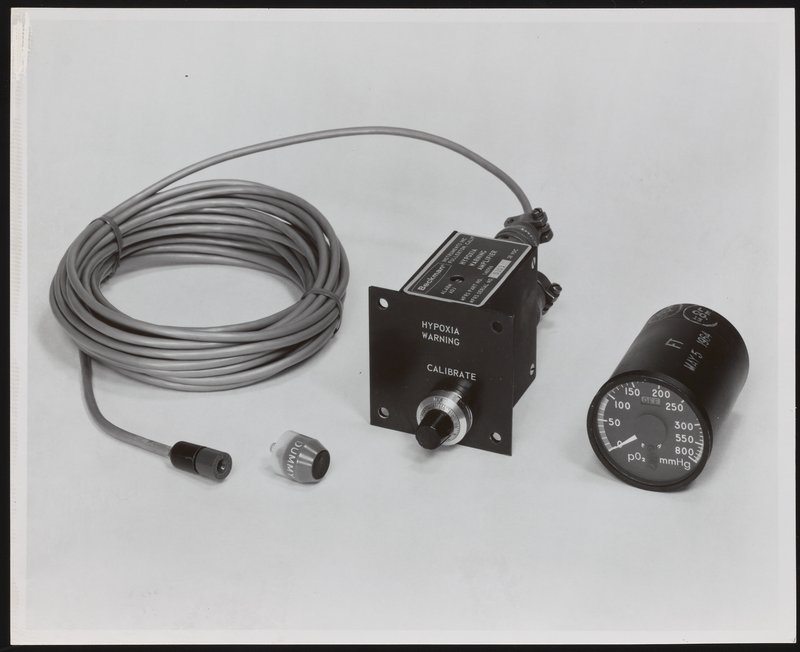 The Hypoxia Warning System was used to monitor oxygen molecule in the space station. It's simple design and relatively practical application that makes this equipment suitable for space exploration. Although trouble may arise that can be overcome by managing the intake of Oxygen molecules. 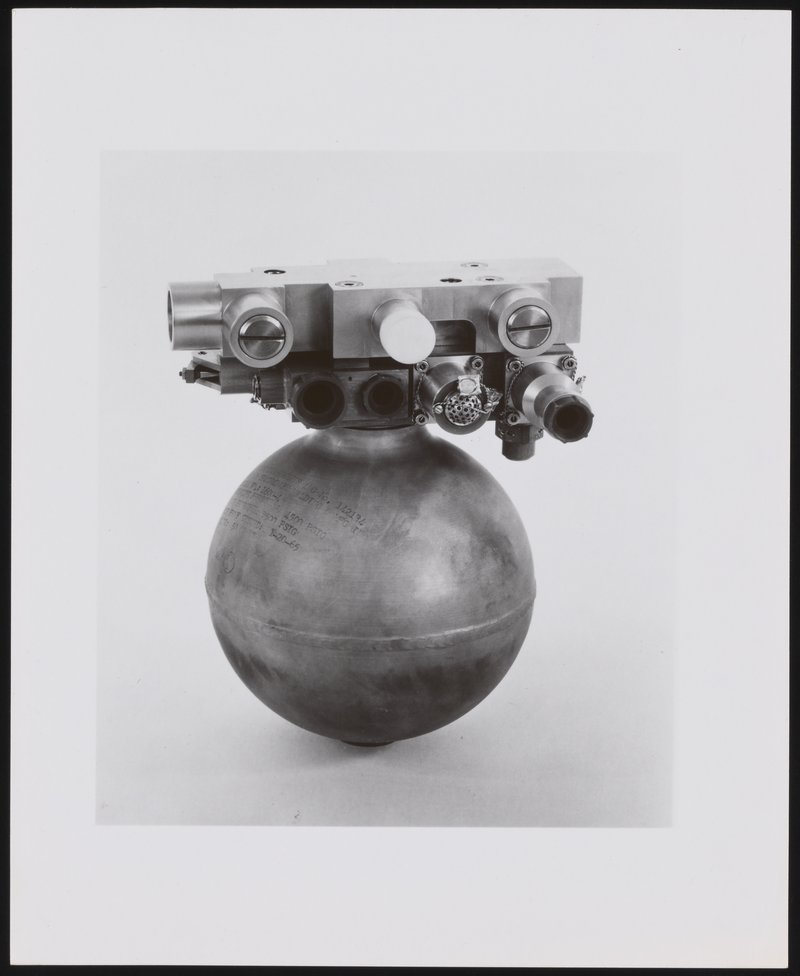 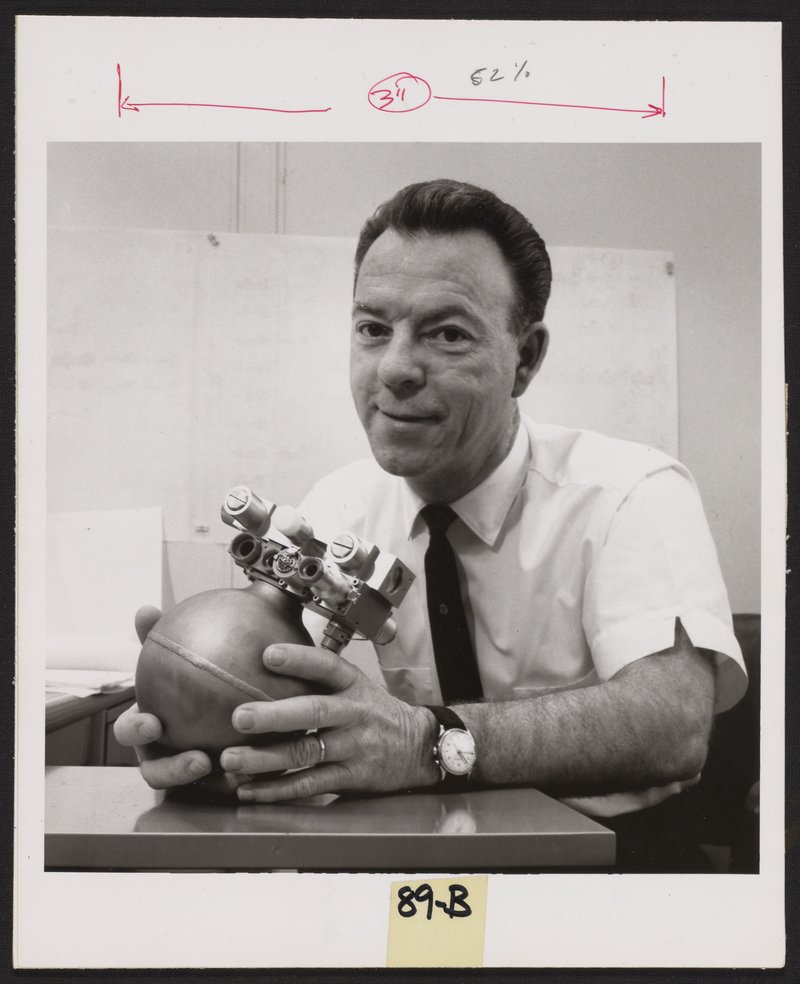 To be at peak human condition, one must maintain blood in circulation to prevent illness. Gravity on Earth keeps human grounded and without the essential force, scientists feared many troubles will result from a loss of blood circulation distributed throughout the body. This cardiovascular instrument maintains blood flow throughout the body and preventing risk of abrupt blood circulation to the lower limbs. The right image shows the project creator Robert Gafford. It's simple design states that the cardiovascular instrument inflates as displayed when in use. 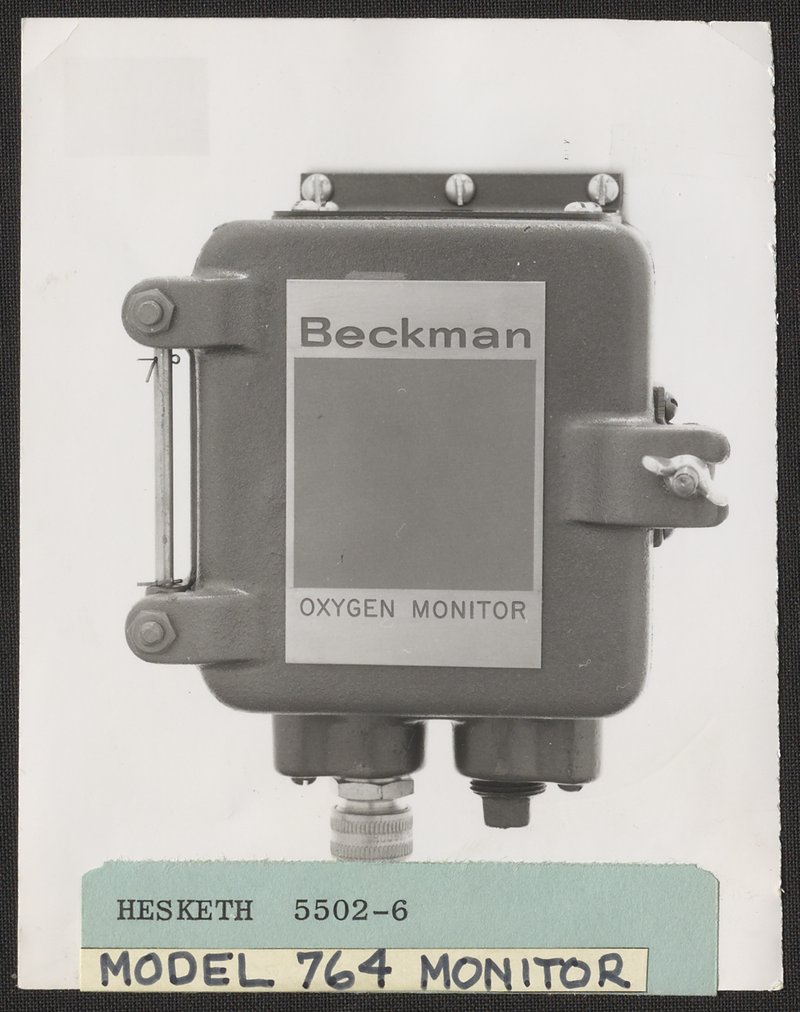 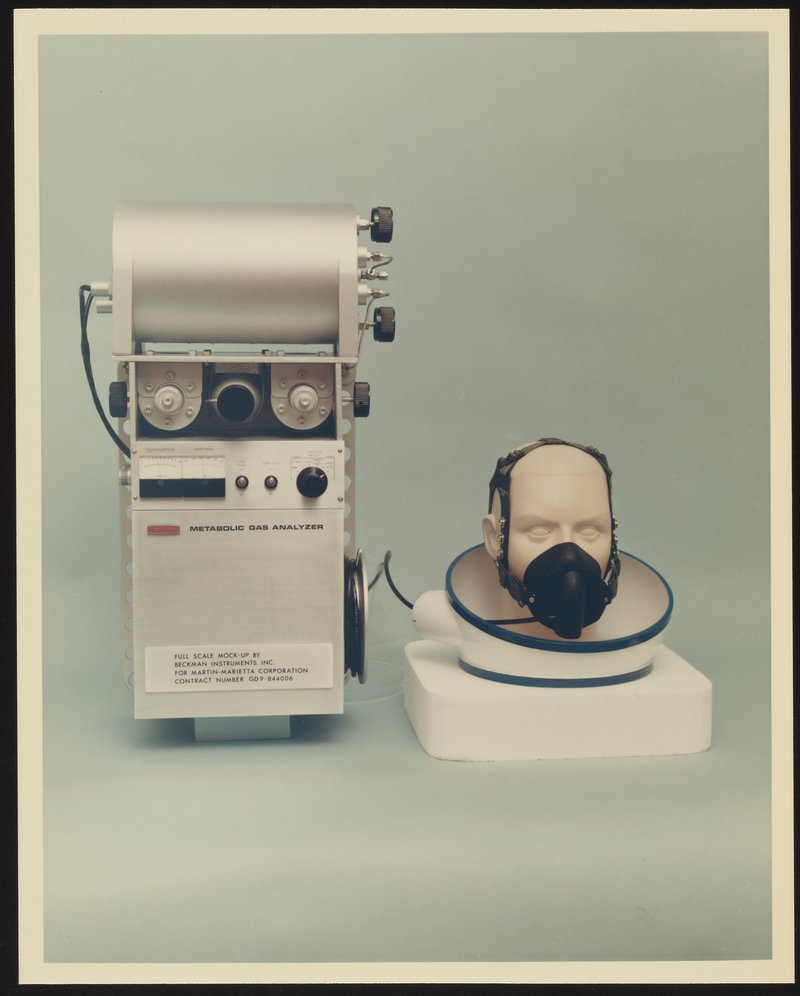 The Metabolic Gas Analyzer measures the breath-by-breath counts yet providing the "oxygen intake" and "CO2 production" for each breath. This instrument was first of its kind to carry out experimentation to measure the capability of "a period of weightlessness".